Is it time for forms to include gender diversity?

Think about a form that you filled out recently, or indeed a form on your website. It’s likely you were asked for your title and your gender. It’s also highly likely that you were only given very binary answer options to these questions, for example, male or female may have been the only choices available to you for your gender. But what if you don’t fit that mould? What if you don’t identify yourself as male or female? Should we be opening up form answers to be more inclusive?

Times have changed. Things are no longer black and white when it comes to gender identification. The proportion of the UK population who define as non-binary when given a choice between male, female and another option is 0.4%, which is 1 in 250 people (Titman, 2014).

For young Millennials and Generation Z, the proportion increases even more. Brought up with the internet and social media, their awareness of gender and acceptance of differences contributes to their challenge of traditional stereotypes.

“A lot of older people aren’t as used to talking about non-binary genders as my generation are, so a little more patience is needed for them, I guess” says Allie, 21.

When it comes to gender, young people are the most open minded and non-defining. They see their identity, including their gender, as fluid. In research by the J Walter Thompson Innovation Group, it was discovered that:

As marketers and designers, it’s easy to add a gender question to our forms and make it mandatory in order to collect data and market our products more effectively. But asking a non-binary person this question and forcing them to choose an option may be seen as offensive, hurtful and yet another reminder to them of how they aren’t accepted.

Let’s look at some statistics:

HSBC now give customers the option of a range of titles, including “Ind”, which stands for individual, meaning free of gender, and “Mre”, an abbreviation for “mystery”. In total they’ll offer 10 gender-neutral titles. However, we noticed that their website only offers Male and Female as options, meaning customers have to contact HSBC directly to change their gender (not the ideal user experience).

With regards to your business, the risk is that your form and the experience it provides may turn people away or at the very least they’ll be left with a poor impression of your company.

So what can we address this within form design?

There are lots of gender-neutral options in use, however, the most prevalent is the use of ‘Mx’. Mx is short for Mixter, however don’t confuse this to mean a mix, it’s simply a way of identifying that a person doesn’t associate themselves as either gender.

As with any form, you should always question the value of requesting data from the user. You may have a question about gender in your form that doesn’t actually provide you with enough value to warrant keeping it. In this case, remove it altogether.

3 Use ‘Other’ but use it with caution

It surprised us to see the BBC using ‘Other’ as their alternative gender choice when signing up to use the iPlayer. If this applied to you, how would you feel being categorised in the Other category? Sure they have a ‘Prefer not to say’ category but what if you want to state your gender but can’t? As a public funded organisation, one that ensures it’s services are accessible and inclusive, we would expect them to be more inclusive in how they handle questions on gender. 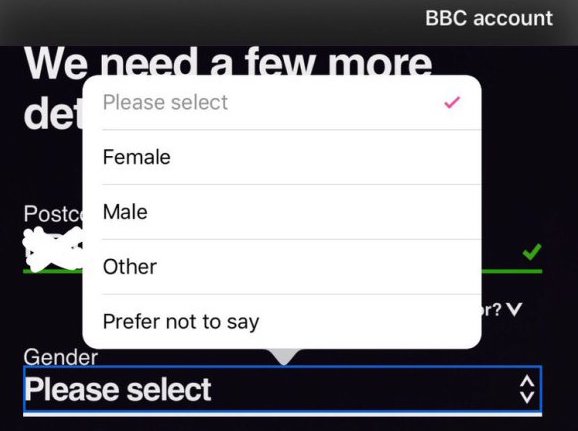 Use ‘Other’ with caution

If you want to represent all possible gender options, the issue is there are a lot! To keep things simple you may need to think about changing the control you use. For example, you could have a free text field, with auto-suggest. Or you could offer further options once ‘Other’ is selected (see below example from the NHS). 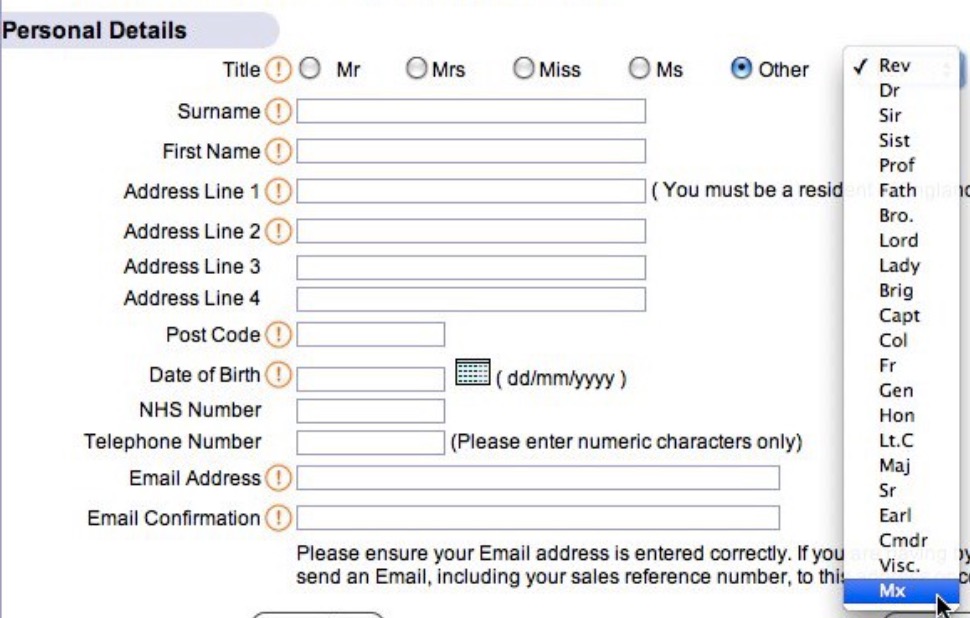 Cambridge University suggest the field is left open for the user to type in their answer (see their recommended example below).

“I would say I am gender fluid but also non-binary and trans. My gender is an evolving thing, like my sexuality, the more I explore it the more it changes. The only reason why I feel I should put a label on it is just to make it easier for other people.”

It’s important to present your gender question in an inclusive way to help non-binary people feel welcome to describe themselves as something other than men and women.

Consider if you really need this field to be mandatory. Could you change it to optional? Or could you add the option of ‘Prefer not to say’?

People may feel uncomfortable disclosing their gender and wonder why you want to know and what you will use it for. Providing a simple explanation can help to eliminate their concerns.

Facebook have an interesting way of asking for ‘Custom’ gender. Once selected, the user is free to type in not just one gender identity, but multiple. They also select their preferred pronoun (see below). 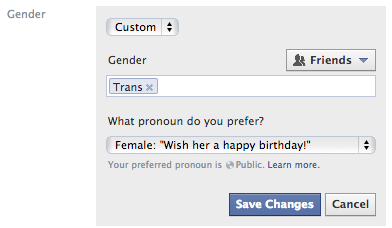 8 Watch your copy too!

When people don’t identify with male or female, they don’t feel comfortable being referred to as ‘he’ or ‘she’. Remember to use ‘they’ or ‘ze’.