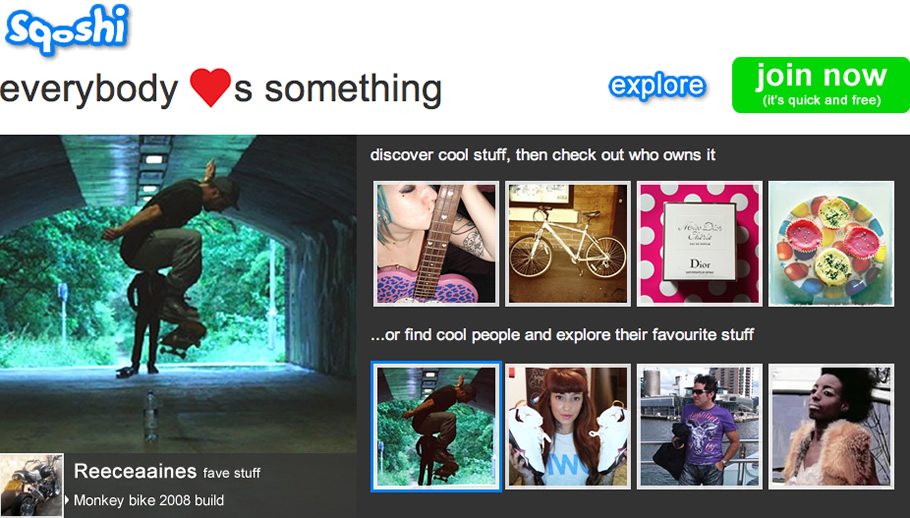 sqoshi
...is where real people hang out
...they upload photos of their favourite stuff
...they follow people they think are cool or who have cool stuff
...they make new friends through a shared love of products
...they discover new cool stuff through people they follow
...they share their stories and experiences of their stuff
...they swop hints and tips of how they use their stuff
...they write real recommendations
the brains behind the beauty
we were inspired to create sqoshi after observing how proud and emotionally attached people are to their favourite things, how people enjoy finding out what other people own and how conversations and friendships can form naturally and easily through a shared love of an item. sqoshi is very much about replicating offline social behaviour in an online environment.
how we worked our magic
concept creation
once we’d identified the concept we undertook massive market research consisting of both primary research (talking directly to people about the idea) and secondary research (investigating online user behaviour, blogs, reading lots of books about social behaviour, psychology and online social nets).
what’s in a name?
we then decided upon a name for the site. sqoshi was a good fit for many of the branding principles we’d read about. it was short, easy to pronounce, easy to spell, had a friendly, fun feel and it also could be mistaken for ‘squashy’ in the UK. to ‘squash’ something you picture in your head an action, you can imagine how it feels and hear the sound it would make, these are all great for helping people to remember and connect with your brand.
design mockups, logos and colour schemes
once we decided on the important elements that should feature in sqoshi, we began designing mockups of potential page layouts, logos and colour schemes. we even tested logo designs on users, so the logo you see today was chosen by you! 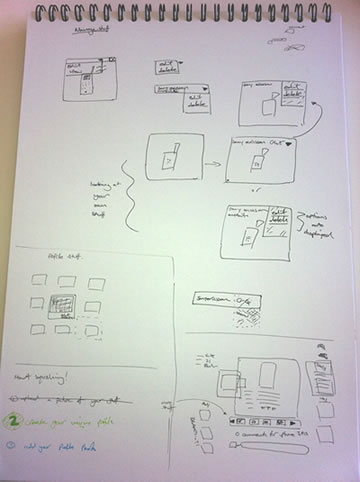 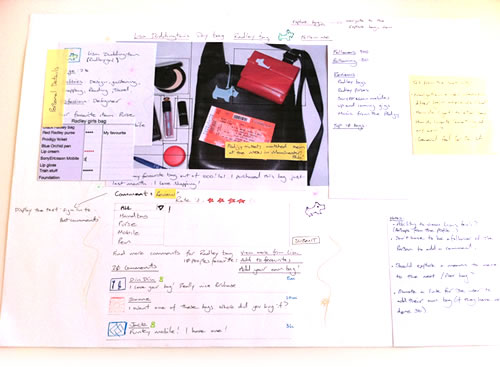 the clever bits
we are completely awestruck by how small cleverly thought through changes to both design and copy can have significant effects on user behaviour. we’re also obsessed with social sites, behaviour (incl persuasion), sociology and psychology. so we used all that we’ve learnt over many years in the design of sqoshi. things like being able to explore and more importantly contribute and interact with the site without needing to join first were incredibly important for user engagement. this also plays on the law of reciprocity and familiarisation. as far as we’re aware sqoshi is the first site to allow complete exploration and interaction without forcing users to ‘join’ first (we know this upsets them!).
magical prototypes and usability testing
the first prototypes we created were simple paper prototypes. later, for more sophisticated interactions, we built mockups and interactive software prototypes that we used for usability testing with potential users. we spent a lot of time perfecting tagging (a top use case for sqoshi and this kind of tagging had never been done before!).
coding it all up!
the not so glamorous part...hours and hours and hours and hours of development time to implement a design solution that is super simple and usable. we've created a robust and sophisticated platform with scaleability in mind and with many sexy features which includes asynchronous (real time) live updates. we have a solid foundation to build from - more features will be arriving soon...
final usability testing before launch!
before launch we conducted one last usability test with our target audience. to our surprise, even the people who we thought wouldn’t use it, said they would (and we did a very good job of acting as independent testers so as not to influence them!). by analysing the users’ interactions we picked up on a few minor usability tweaks we needed to make. however our usability questionnaire showed that from the users’ perspective they all thought sqoshi was dead easy to use. we didn’t specifically ask them about usability during the test so it’s interesting that everyone made some reference to it’s ease of use. it shows that people are aware of usability and that it is very important to their overall experience with websites and software. 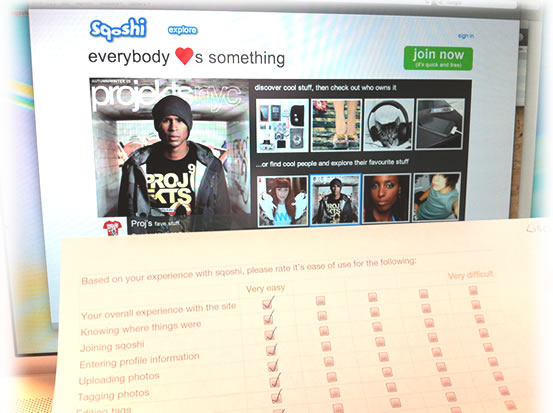 sqoshi users are saying...
“it’s good cos you can see people’s personalities through what they have.”
“when you see what people have, you want it!”
“it’s like a visual diary of stuff.”
“it’s refreshing to see something new cos i’m bored of Facebook...there’s just so many people on there that i’m not interested in.”
“i like how you can see the background...it’s good...makes you more individual.”
“your profile is you on a page - everything you are into.”
“other social networks are quite soulless... not about the little things that make you and your interests.”
“it just looks really neat.”
“it looks awesome, really arty & cool.”
...and importantly they all think sqoshi is super simple to use!
“it’s just easy, it’s easy to use. it is really easy.”
“it’s dead easy to use... i’m really rubbish at new websites...i normally Google things to find out how to do it”
“i like the layout, it’s really simple”
“i like it cos it’s uncluttered”
“it does what it says on the tin”
“it just looks really neat”